The largest city on the Mississippi River, home of the blues, birth place of Rock & Roll, birth place of Piggly Wiggly, home to Elvis Presley, place of assassination for MLK, and I could go on. Memphis is know around the world for various things. It’s city name translating to “place of good abode”, named after an ancient Egyptian city that sits on the Nile River.

I grew up only an hour from Memphis and still to this day live that close, yet we never take advantage of all the things there are to do there. I’ve made it a goal to start exploring more in my own “backyard” and Memphis, being only 70 miles away, is a good start.

The third weekend in January, my friends and I went to Memphis for a day trip. We went that Saturday for a Taco and Margarita Crawl, which turned out to basically be a scam. We had bought tickets and acquired wristbands that were supposed to get us specials at their list of bars, however none of these places knew what was going on nor did they have tacos. We decided to make the best of our day in Memphis regardless.

Our first stop was the Peabody Hotel, which in my opinion you can never visit too many times. I am accustomed to seeing the Peabody at night and full of crowds (as I’ve been to events here), but on this chilly Saturday the lobby was almost empty and it seemed so peaceful. 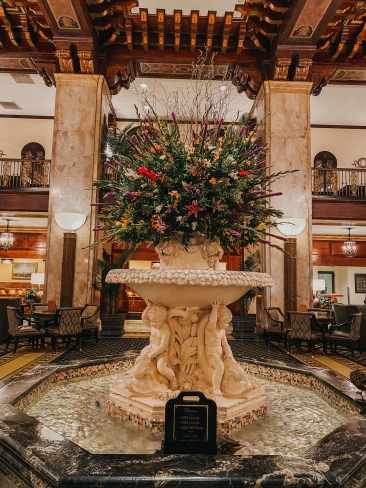 If you’ve never had a chance to visit the Peabody, make sure if you’re ever in Memphis you stop in. They’re well known for their ducks, that you can see in the lobby daily from 9:00am – 5:00pm. They live on the roof in their very own little Peabody Hotel; I’ve been to the top and seen it first hand. 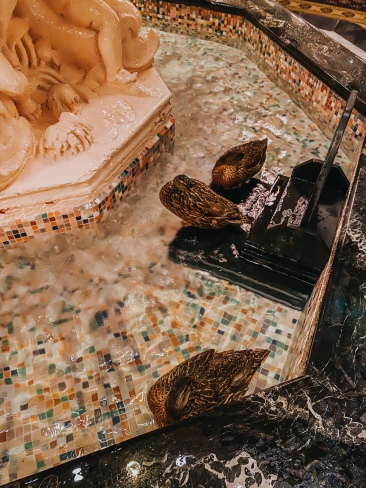 Next up, we headed to A. Schwab Trading Co. to look around. A. Schwab is the only original business remaining on Beale Street, having opened in 1876. The second floor still has artifacts and mementos of the store and city’s past. They are THE place to purchase all things Memphis, such as souvenirs.  A neat thing too is that they still have a soda fountain and they also offer fresh gelato.

Just a few steps away, we headed to Silky O’Sullivan’s to hangout for a bit. At Silky’s you’ll not only find mystery diver buckets, but goats too! Yes, that’s right, I said goats. They even have their very own goat tower to climb! Silky’s also has dueling pianos as well as indoor and outdoor seating. I enjoy stopping in here on visits to Beale Street. 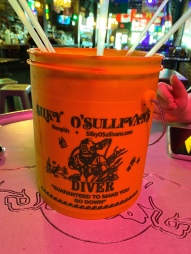 After finishing our mysterious diver bucket, we headed to Alfred’s on Beale. This place was the start of our ‘crawl’. I had one of their famous “funky monkey’s” to drink while waiting in line to register. Although we didn’t eat anything here, I have had their food in the past and it’s all good!

There were a couple of neat “murals” on Beale that we snapped some photos with, both not really considered permanent murals. 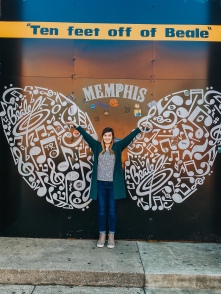 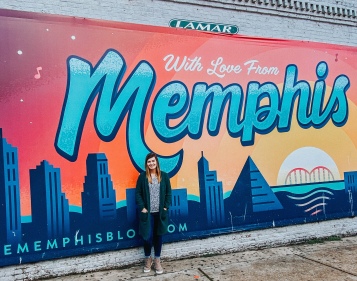 We also stumbled across the Old Daisy Theater, which had a gorgeous half dome entrance. During the 1980’s the “Old Daisy” was extensively renovated and reopened as a Beale Street Blues Museum. Today it is in use as a banquet hall providing live entertainment. 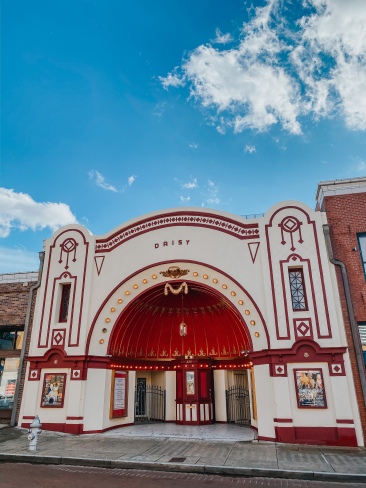 I was surprised that there weren’t as many people on Beale Street on a Saturday, but then again it was a bit chilly out. Next we popped into Coyote Ugly, and did a little dancing on the bar. We grabbed a drink and chilled here for a bit, laughing, conversing, and still trying to figure out where tacos were. 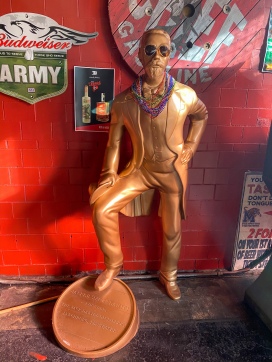 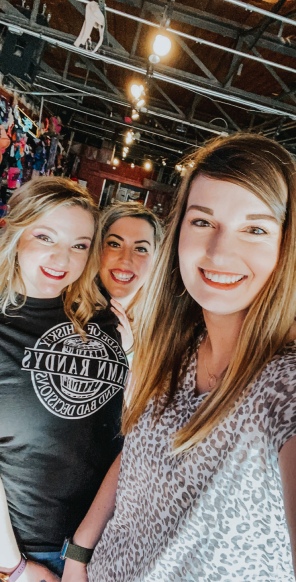 We wandered into Jerry Lee Lewis’ Cafe and Honky Tonk, and it was then we realized that there were no tacos anywhere. This bar was neat, they had a full size car on the wall and a motorcycle on top of table. 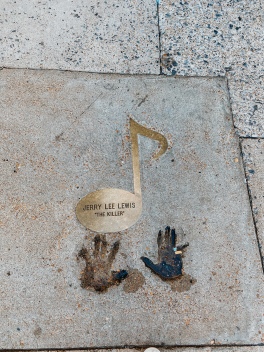 Making our way to the last stop on the crawl list, we wandered into the Flying Saucer. We snacked on some chips and queso (which was phenomenal), and had some drinks while we figured out where we should eat dinner. 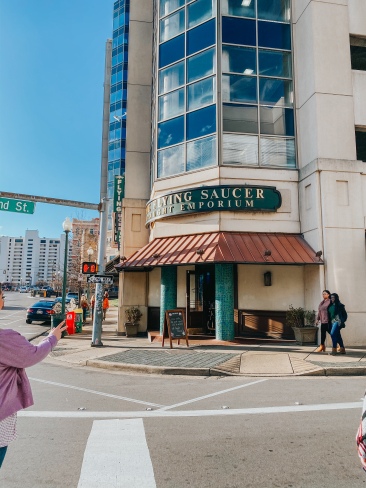 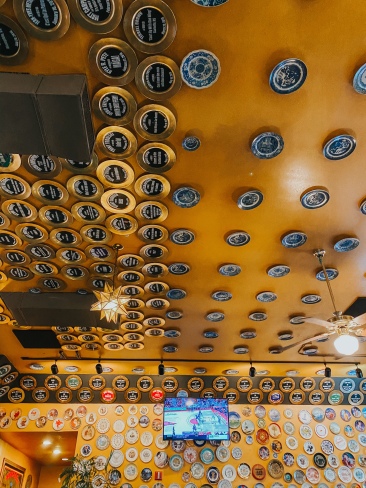 All of us starving, we decided on a good ole Huey’s burger. I love Huey’s burgers, they are always delicious and never disappoint. Huey’s has been serving up Blues, Brews, & Burgers in Memphis, TN since 1970. They have several locations in the Memphis area, and I highly suggest to stop in one if you’re ever in Memphis. 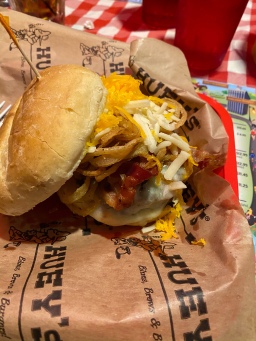 After dinner, we were craving something sweet and decided to try out Insomnia Cookies. Their cookies were so soft, fresh, warm, gooey, and wonderful! I think what sets them apart from competitors, is that they will deliver until 3:00am. When you have a late night craving during your stay, you can just order cookies to be delivered!

We had a great day, despite the ‘crawl’ being fake, and enjoyed walking up and down Beale Street. It was a great day full of laughter, good times, and good food shared with great friends. 🙂 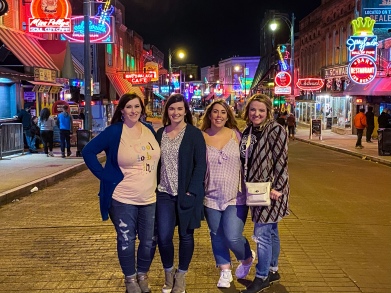 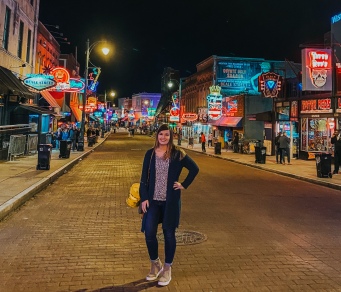 First time visiting here today and the fall foliage was beautiful! 🍁🤩 Finally able to cross this Arkansas location off my list! Made famous in the movie Gone With the Wind! 🎥
Five years of marriage down and a lifetime to go.💙
Happy Fall Y’all! 🍁
🌺S🌷U🌼N🌹D🌸A🌻Y💐
🔅Happy Sunday🔅
Hi friends 👋
Follow On the Rhoades Again on WordPress.com
Loading Comments...
%d bloggers like this: