New Orleans is a one-of-a-kind city, full of celebrations year round including one of the most well known in the world: Mardi Gras. The historic heart of the city is the French Quarter, home of Jackson Square, Bourbon Street, and many historic French and Spanish Creole homes.

John and I just recently spent 4 days/3 nights in New Orleans, Louisiana. My first time here, his second, and it was so much fun! While we didn’t even come close to seeing / doing everything there is to do in this city, we definitely crossed some things off our bucket list.

We got into town around 4:00pm and got checked in to our Hotel. If you’ve been reading my blogs you know by now I’m a huge Airbnb fan, but this trip we stayed at Harrah’s New Orleans since we had a free room. It was extremely clean and smelled wonderful, John kept laughing at me because every time we entered the hotel I would tell him it smelled like laundry softener (because it did!!!). 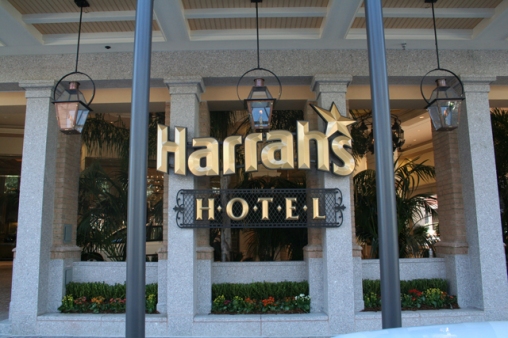 Our first thing on my list (yes I’m one of those weirdo’s that has a travel to do list/itinerary) was to head to the canal street Ferry terminal and take a ride across the Mississippi river to Algiers Point.

John & I on the Ferry 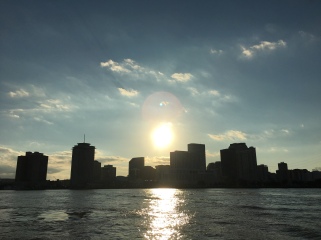 Once across we walked beside the levee until we came across The Crown and Anchor, an English pub, which we decided to stop at for a drink.

Although I grew up 5 minutes from the Mississippi River, crossing it on the Ferry was a totally different experience. Heading back across the river as the sun was setting made for a perfect view.

New Orleans from the Mississippi River 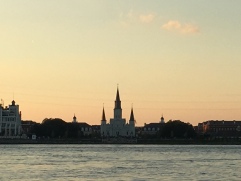 For dinner we walked over to Oceana Grill. John had their blackened alligator, while I went for a pasta dish. Overall it was good food, but nothing to rave about. We explored the French Quarter area some, mostly Bourbon street, then headed back to our hotel for the evening.

I woke up excited as this was easily my favorite planned day. Our drive to the outskirts of the city (about an hour out) took us near Vacherie, Louisiana, which was basically miles and miles of sugar cane. It was interesting to see a different crop than what we grow here in Arkansas.

Our first stop, the #1 place I wanted to see if we ever came close, was Oak Alley Plantation. Named for its distinguishing visual feature, an alley created by double row southern live oak trees runs between the home and the river. Our tour guide for the house was wonderful, detailed, and knowledgeable of the home and history. 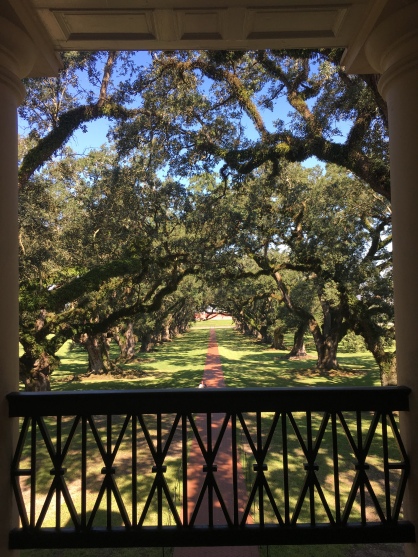 View from the top floor

For lunch we ate at the Oak Alley Restaurant, which was amazing! John had Crawfish Étouffée, red beans and rice, andouille sausage, and shrimp/crab/okra gumbo. I had chicken and andouille sausage gumbo (my first time trying gumbo), and a four cheese pasta. We were stuffed and couldn’t even think of dessert, although I’m sure it would have been just as delicious.

Back on the road to our next stop, Evergreen Plantation, we passed a few more plantation homes along river road. Evergreen is the most intact plantation complex in the South with 37 buildings on the National Register of Historic Places, including 22 slave cabins. Today, it is a privately owned and working sugar cane plantation.

This tour lasted about 90 minutes and was full of historic information, not only about this particular plantation but also about the antebellum period as a whole. Our tour guide was phenomenal and she knew her stuff! 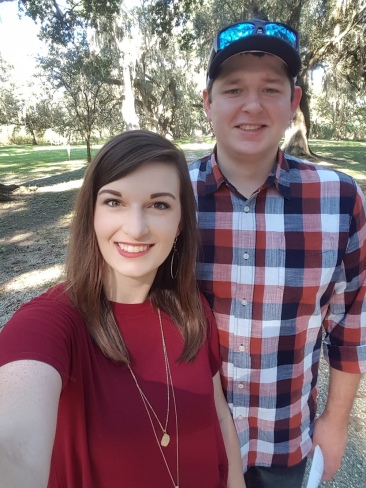 22 Slave Cabins down the road of Live Oaks

After our tour we made our way back to New Orleans where we rested for a couple of hours before dinner. For dinner we walked to Mulate’s, where John had the best blackened alligator he’s ever had. I wasn’t very hungry, so I just had some of his food. It was delicious!

Next we made our way to the front of St. Louis Cathedral for a Ghost Tour by Free tours by Foot. Alec was a spectacular tour guide! He knew the city well, the history, and some pretty interesting stories. He was also extremely friendly and gave us some recommendations for NOLA. I highly recommend his “New Orleans cheat sheet”, Big Al’s, Big Easy, if you’re searching for recommendations from a local.

After our tour was over we walked around the French Quarter area, stopping in a few places. Before calling it a night, we stopped at Cafe Du Monde for some of their famous beignets and what a perfect late night snack they were! 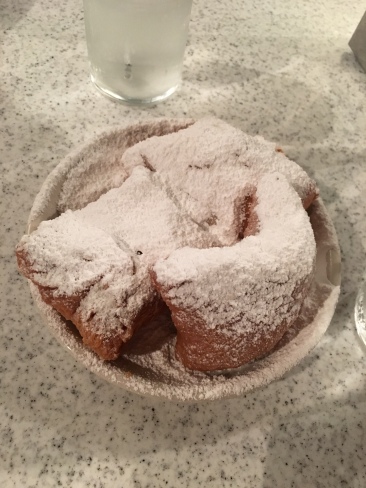 Up and at em Tuesday morning, we took a streetcar to meet up with another Free tours by Foot group. This was a tour of St. Louis Cemetery #1, famously known for the cemetery that holds the tomb of Marie Laveau the Voodoo Queen. Due to the water table being so high in and around New Orleans, they do not have underground burials. Instead, they are fully above ground concrete tombs normally holding many family members. Quite different, than what I for one am used to seeing, but neat to see the regional and cultural differences. 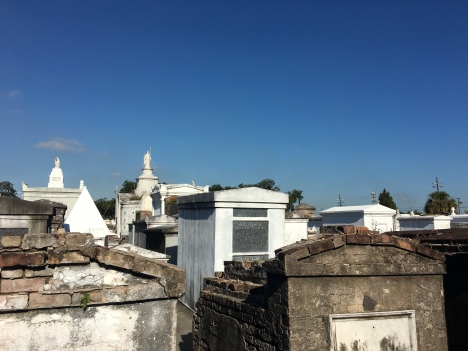 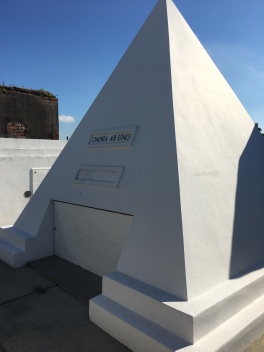 We stopped at a welcome center right next to the cemetery and I found this map interesting. The red is the areas of New Orleans that were underwater after Hurricane Katrina hit in 2005. 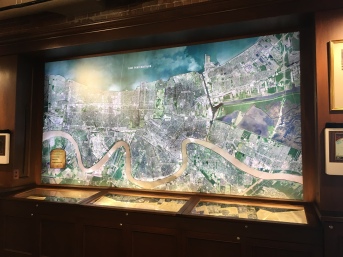 Map of NOLA, red is what was underwater after Katrina

After lots of walking, we were ready to sit down and take a break. We wandered down to Bourbon (hoping for a better vibe during the day), and hung out at Fat Tuesday for a while.

Becoming hangry after no breakfast, we took a short walk to the Gumbo Shop. It was the perfect spot for a mid-day meal. I loved the ambiance and “chill” of the restaurant. John got the alligator sausage and I went with a blackened chicken po-boy, the food was phenomenal!

Being there the week of Halloween, there were several houses decorated around the French Quarter, I took a few pics of my favorites.

Large spiders hanging all over

We spent the rest of the afternoon exploring downtown NOLA. We went back to the St. Louis Cathedral to see it in the daylight. It is the oldest continuously active Roman Catholic Cathedral in the United States, originally built in 1727 and dedicated to King Louis IX of France, The Crusading King, who was later canonized by the Church. The original St. Louis Cathedral burned during the great fire of 1794 and was rebuilt. The present structure was completed in the 1850’s. 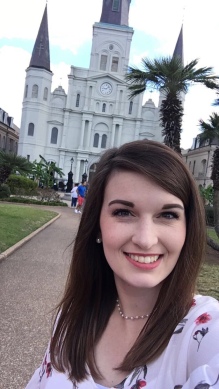 As suggested by some of the locals we went to the French Market, strolling through the many vendors and taking it all in. It wast mostly handmade trinkets and souvenirs, along with lots of food. John had some alligator on a stick, man he really likes alligator.

Walking back to the hotel, we wondered in a few more small shops. My favorite being Santa’s Quarter’s. John rolled his eyes as I walked in, since he’s not as big of a Christmas person as myself. But, we both enjoyed that little store. While I was picking out an ornament to signify our time in New Orleans, John conversed with the lady working. She was the SWEETEST woman, she liked John so much that she gave him a Fleur-de-lis ornament for free!! 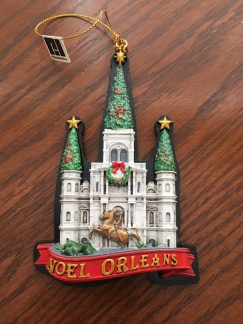 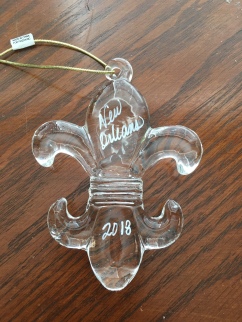 Fleur-de-lis ornament John got for free.

Tuesday evening we didn’t go out for dinner, we just grabbed something at Harrah’s Casino, then called it an early night.

Our last day in NOLA was a short one as we had to drive 7 hours to get back home. We slept in then headed out to brunch. We had heard wonderful things from locals about Mother’s Restaurant, along with the fact that it had been on several shows on food network. I hate to say it, but we were disappointed. The food was just okay which would have been fine.. but the service was just awful. I hope that we just went on a bad day, and I’m thinking we did since so many people had raved about it. They’re famously known for their baked ham, so I had a ham biscuit along with some of their homemade raspberry preserves (which were delicious). John had the shrimp creole omelette with grits. 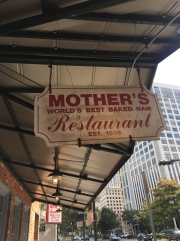 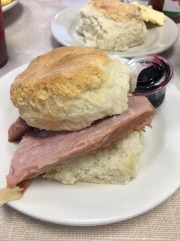 Overall, our trip to New Orleans was great! I was pleasantly surprised at the great service we had at almost every restaurant, along with the quickness of receiving our food. It’s a very unique city, lots to do and see. The only thing we didn’t get to do that was on my “list” was to explore the Garden District, but next time for sure! We didn’t drive around in NOLA, once parked we used public transit to get places or walked (SO much simpler and cheaper). 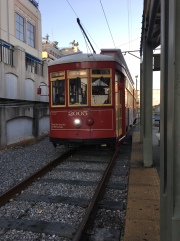 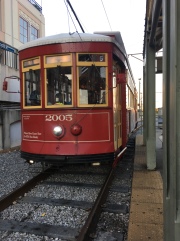 Until next time, Au Revoir.

“Take me down ol’ river man, Lord to set me free. I’ve crossed the highest hills, to tell what I believe. Got a buddy spoke to me, whispered in my dream. Said find the old blind river man, ride to New Orleans. Down in New Orleans.”

– Shane Smith and the Saints

1 thought on “Down in New Orleans”

First time visiting here today and the fall foliage was beautiful! 🍁🤩 Finally able to cross this Arkansas location off my list! Made famous in the movie Gone With the Wind! 🎥
Five years of marriage down and a lifetime to go.💙
Happy Fall Y’all! 🍁
🌺S🌷U🌼N🌹D🌸A🌻Y💐
🔅Happy Sunday🔅
Hi friends 👋
Follow On the Rhoades Again on WordPress.com
Loading Comments...
%d bloggers like this: