Located on the banks of the South Platte River close to the foothills of the Rocky Mountains, Denver was founded in November 1858 as a gold mining town. Denver is exactly 5,280 feet above sea level (one mile), thus making it the “Mile High City”.

The first week of August, I spent 3 days in Denver for a work trip. While I had limited time to explore, I did my best to see some key spots.

I took an early flight into Denver so that I could spend some time in the city before I went to my first work meeting. As soon as I got off my flight, I headed to the RTD train and bought a pass to downtown Denver Union Station. It was only $10.50, which was cheaper than an Uber, and had a decently scenic view. It took about 40 minutes to get to town, with 4-5 stops along the way.

On the way into town we passed a few murals, along with the Rockies Stadium. 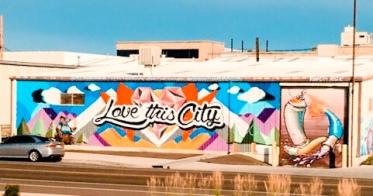 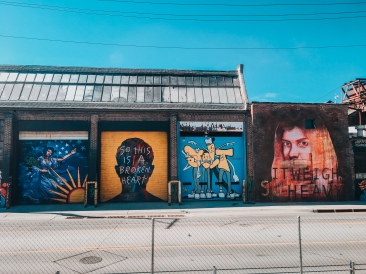 When I got to Union Station, I had brunch at Snooze, an A.M. Eatery. I had their chocolate chip pancakes with a side of bacon and a cranberry mimosa to drink, all of it was wonderful! 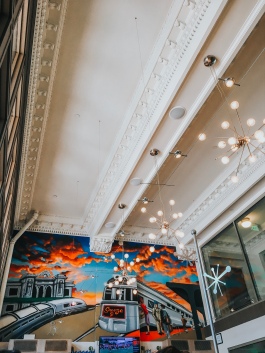 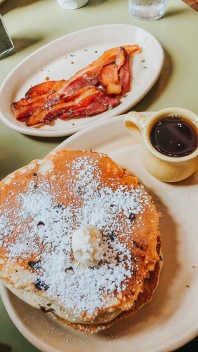 Denver Union Station has been there for 100 years, and the architecture was beautiful! There were several little restaurants, shops, and places to chill in the station. I took advantage of their charging tables and did some work before heading out to explore.

After brunch, I stored my luggage at Lugden (after reading great reviews) and made my way towards 16th Street Mall. The mile-long, pedestrian-friendly mall is packed with shopping, restaurants, and attractions. I wandered in and out of shops, grabbing a couple souvenirs. While walking, I came across a couple of murals I thought were neat and impressive.

The first one “#TheBuzzMuralDenver” is one of the newest in the city, just recently finished in the last couple months. I knew it looked super fresh when I stumbled across it. The mural is located on 17th Street between Amante Coffee and the Oxford Hotel. For more on the artist, click here. 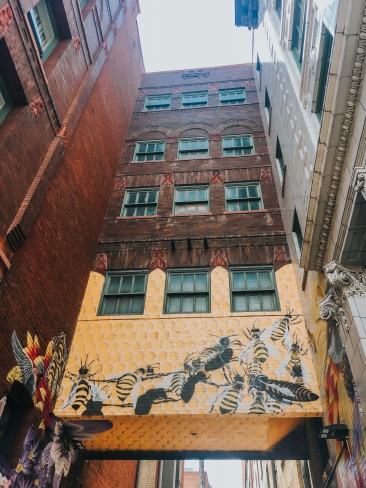 The second mural I came across, was this cowboy strumming on his guitar. While this mural is fading now, it reigns as a symbol of Denver’s history as a cow town. This one can be found on the side of William Matthew’s Studio, which also has prints inside of the same man. 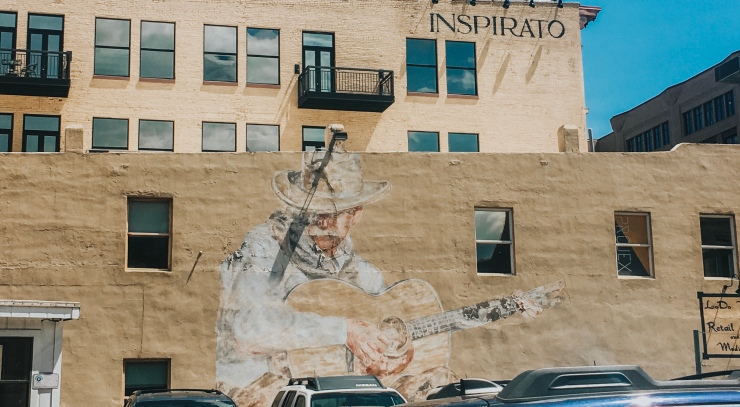 After spending about 1-2 hours down 16th Street Mall, I hopped on the free MallRide bus and headed back to grab my luggage. I left downtown Denver and headed to check-in to my hotel for meetings. The rest of the evening was spent doing work things, so I won’t bore y’all with the details.

This day was full of meetings, then afterwards we went to Topgolf for dinner and fun! I had never been to a Topgolf before, and although I’m not a golfer AT ALL it was still enjoyable! I did better than I thought I would, but definitely didn’t win any games. 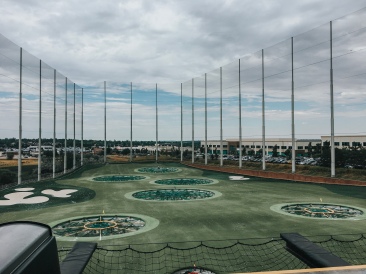 This day was deemed a travel day, so I decided to take full advantage of that. I got up early and made it into downtown Denver before 8:00am. Feeling awful (altitude + a bad cold hit me hard), I was mentally telling myself to push through this day full of sightseeing.

I had a doughnut quickly for breakfast as I finished up some work at Union Station, then made my way to the Lugden storage van to stow away my luggage before my next adventure. I have nothing but positive things to say about this experience, 10/10 would recommend! I bought locks for my luggage, but felt very trusting of the Lugden employee.

To start my day off, I met up with Aspire Tours to do a half day foothills explorer tour from Union Station. This was a 4 hour tour that stopped at 3 key places and I knew it would be perfect for my limited time. We set out in a small group of 8, including the tour guide (who was AWESOME), passed the Bronco’s stadium heading out of town, and drove through the mountains basically (I was PUMPED). 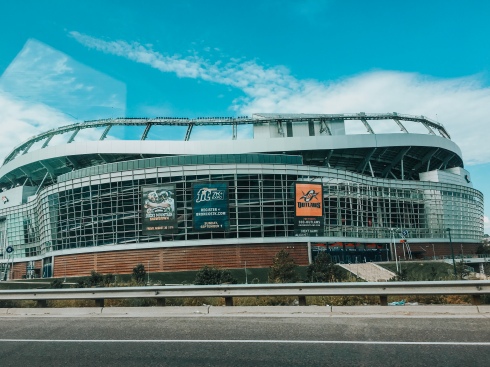 First stop on the tour was the Red Rocks Amphitheater. Pictures of this place are beautiful, but they don’t do it justice in the slightest! The rocks were ENORMOUS and PHENOMENAL!! It’s on my bucket list to go back and see a concert there one day. 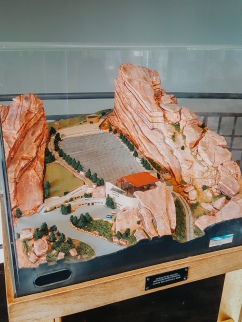 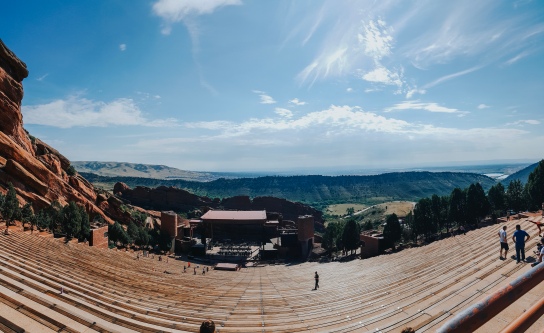 Leaving the Red Rocks, we drove along the historic Lariat Loop up Bear Creek Canyon to the town of Evergreen for our second stop 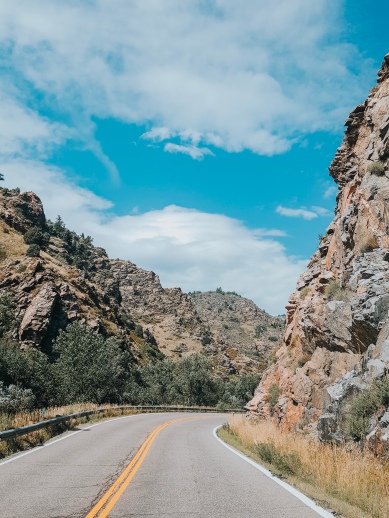 Evergreen is at a 7,220 ft elevation, and as we made our way upwards to it you could definitely tell the difference in altitude. Stopping in Evergreen, we walked alongside the lake and into the quaint town.

I stopped in the Muddy Buck Cafe to get a snack, and ended up with a large, delicious, warm, and gooey chocolate chip cookie.

Back on the road, we headed towards our last stop: Lookout Mountain. The 7,377 ft peak is located in Lookout Mountain Park and is also famously known as the gravesite of William Frederick “Buffalo Bill” Cody. 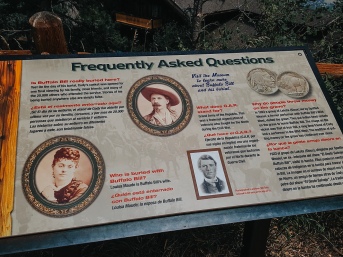 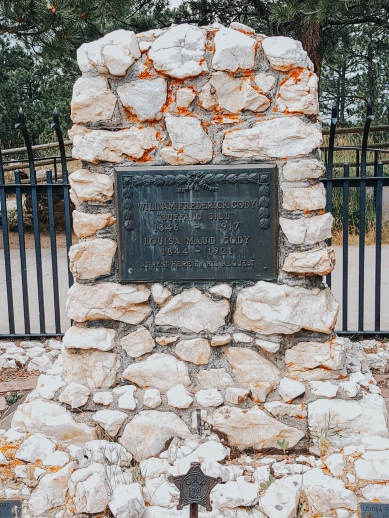 From the top of Lookout Mountain, you could see the city of Golden right below as well as Denver in the distance. The views from the lookout were breathtaking! 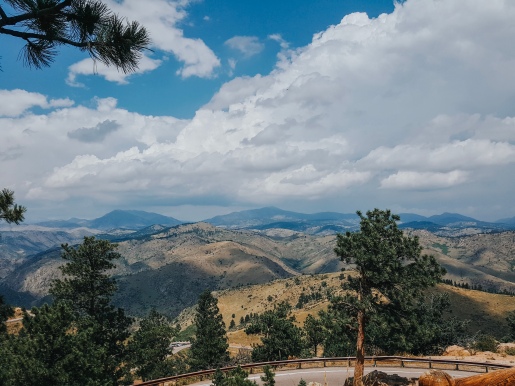 After leaving Lookout Mountain we passed through the town of Golden on our way back to Denver. A couple well-known places located in Golden are the Coors Brewery and the Colorado School of Mines. 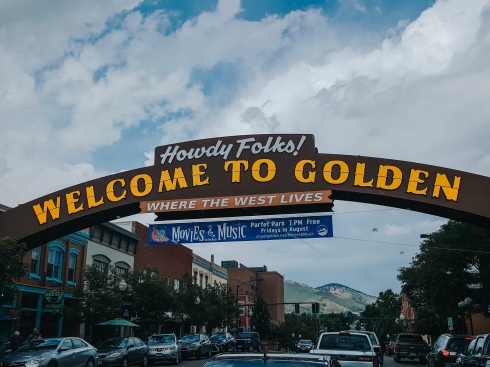 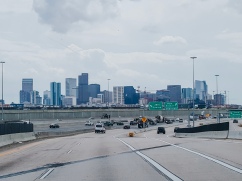 I was dropped back at Union Station, and took some more time to walk around downtown and explore. First I made my way to Larimer Square, Denver’s oldest and most historic block. I loved the state pride shown with all the flags hanging! I walked around the square, but I didn’t really go inside anywhere as I was on a time crunch.

Next, I made my way to the 16th street mall again. I loved downtown Denver! There wasn’t trash laying around, they had flowers EVERYWHERE, and the people were SO friendly!

I grabbed a ride on the free MallRide bus, and made my way to the end of the street opposite Union Station. I hopped off, being just a block over from the Colorado State Capitol. There are actually free tours you can take at the capitol, even going up in it’s 360 dome, however I did not have time to spare aside from snapping a few pictures. 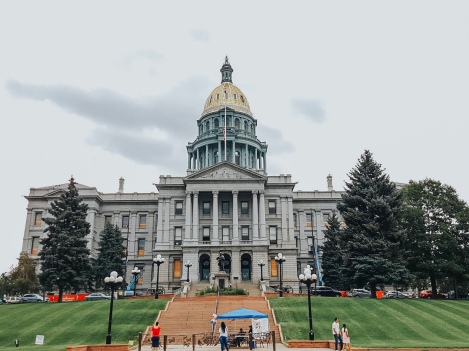 One of the steps in front of the capitol building reads “One Mile Above Sea Level”, which really puts things into perspective as to how elevated Denver is.

Trying to dodge the rain, I utilized an electric scooter to get to my next stop. I was SO glad I was able to get a ticket to the U.S. Mint. Growing up I collected quarters from each state, and my grandpa always got us the newest and most unique coins that came out. The tickets for the mint are free, however they’re first come first serve, in person only. I picked up my ticket for the 3:30pm tour at 8:00am that morning.

Our tour guide was great, he seemed very knowledgeable on the process and history of the Mint. Everyone in the tour got a souvenir, a non pressed penny and also a pressed one. Did you know it costs them 2 cents to make a penny? Also, it costs them 7 cents to make a nickel. They end up making a profit on the dime and quarter. 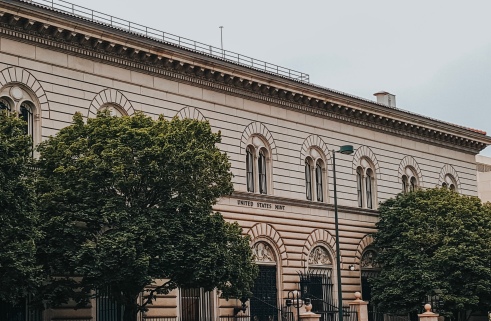 Following my Mint tour, I took an Uber to the Lower Highlands area and spent about an hour taking in the scenery and sights while slowly making my way back to Union Station. There were SO many dog friendly places, again more flowers, art statues, and I walked through a lovely park that had people playing with their pups and a live band. 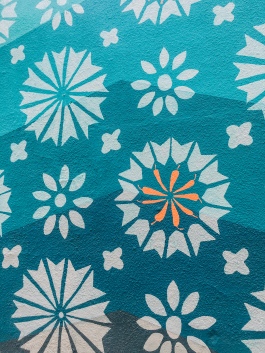 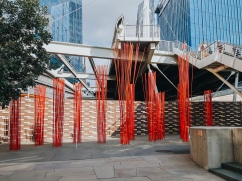 I grabbed a quick bite of food at Union Station, then hopped on the train headed back towards the airport. The Denver International Airport is known for it’s uniquely designed roof. The white peaks evoke the snow-capped Rocky Mountains and the Native American teepees that were once spread across the surrounding plains. 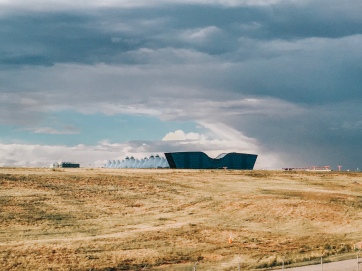 Although I got sick and had a 3 hour flight delay coming home, overall my trip was delightful. Denver had been on my bucket list for awhile, and I’m glad I was able to visit even if for a short time. I will most definitely be back, and next time with my husband!

Have you ever been to Denver? If so what was one of your favorite places while visiting? I had a list of places I failed to see while there, but that’s okay because it’ll just be a growing list for the next visit.

“I’m about a mile high in Denver, where the rock meets timberline.” – Jimmy Buffett

1 thought on “A Mile High in Denver”